Notes on The Bean


The post below this one is the hardest bit of writing I've ever done and I havn't even finished it yet.

I'm trying to get the courage to finish it.

Patty handed my heart back to me over the phone last night.

My weekend was backache and a heartbreak.

Time to finish The Bean.

I only tell you about my heartbreak here because five hours ago, after I talked to Patty I put this post on my other blog Atomic Toy Spaceship and it didn't belong there.

To much heartache to write anymore. I'll be back in a week or less.

Posted by Robert A Vollrath at 7:58 PM 2 comments:


As I drove into Chicago I heard on the radio that I was entering the murder capital of the United States. This negative news didn't bother me at all because I was going to see the bean.

Here are some photos of the sculpture Cloud Gate, nicknamed by the people of Chicago as The Bean.

As I stood taking those photos the knowing came upon me. Reality is a reflection of a reflection of a reflection bleeding off into the infinite and finite. The dream burned brighter in me than it had in years. Then the dark vision filled me with dread. People are going to die, I must get out of this city. For years I've had a vision of a railroad bombing in America. Maybe that's what was going to happen. I know it won't happen on the East or West coast. Somewhere towards the middle of the USA.

I pulled into busy streets of Chicago and made one wrong turn after another getting more lost with each turn.

"I'm in the BROKEN MIRROR UNIVERSE, I must do the reverse of what I'm seeing!"

I made two turn against the puppet masters pulling my strings from the other side of death and then I heard two gunshots. I knew two people had died. The broken mirror universe shattered and I was back in this universe.

I could name drop here but I won't. I won't use the dead that way. The murderer had taken a child and it was soon all over the radio. The guilt set in. I had failed again.

There is never enough good in the world as the evil swallows it up. All my fondest wishes had been granted. I had a grand daughter and a grand son, no man could know a greater gift.
I had failed. I found my way out of Chicago. I had failed.

I drove into the night.

I drove onto the endless road.

A thousand angels flew behind me.

A billion dreams shattered before me.

If only I had made those last two turns.

The Demon of the Night jumped on my window.

"I no longer believe in demons of my own mind. I' am a being of pure light and you are nothing!"

The Demon exploded into embers and flew off behind me and behind me flew ten thousand angels.

"I'm coming Denver, Grandpa is coming. I'll be there for your first birthday."

I drove into the night past the Dells in Wisconsin. Monsters fueled by imagination melted off trucks and cars and flung by invisible hands at my windshield. I turned them all into rose petals.

An army of hell that I had created with my own mind came towards me.

I turned them into butterflies.

A hundred thousand angels flew behind me and one whispered in my ear.

All the angels flew away and I was on my own. I pulled over at the next motel.

The next day I played with my grand son Denver Vollrath. It was a good birthday party the following day.


Ernie is a cigar smoking earthworm and Sid is a little green snake with a heart of gold.
Posted by Robert A Vollrath at 7:54 PM 4 comments:


Nuclear Cow Dog is the silliest bit of story telling I've ever done. Created with my friend Cris Lloyd when we worked at Artworld many years ago it still makes me laugh.

In the above comic book art Nuclear Cow Dog eats the universe.

We no longer spoke with our minds. The magic was gone. There was no half speak in our conversations and long moments of silents filled the time we spent together.

She had grown so much in the short time I knew her but she was still in that moment of death.
I had long ago left that echo of forever behind me and was content to be in the finite of this life.

I was a few months younger than her in the flesh but my spirit was truly ancient and my imagination was boundless in the ways of people.

The Roses I gave her sat on a table and her brother surprised us has he walked through the front door. I stood up and he gave me a cold stare. She introduced her brother to me and he took my hand in a firm grip. As I looked in his threatening eyes with compassion he became nervous and released his grip as he looked away.

He saw the roses on the table and I saw a flash of anger on his face. I meet that quick look at me with the slightest of smiles.

How long had he been spying on his sister and I? With that silent thought I sat back down.
After some confusing talk between a brother and sister he left.

I talked to Patty tonight. I must have sounded like a fool. I've been having backwards days.
I don't know if our relationship has any future and my mind hops from one memory to another when I think about her. She is a miracle of courage and faith.

I think of the roses I gave her and the look of anger when her brother saw the roses. Later she tells me about the meeting her father and brothers had with her about me and other things.
She tells me how protective they were when she was a teenager. Her father was part of Air Force Intelligent. One of her brother's was a policeman. All the boys her age were afraid to date her.

In the meeting about me, a younger brother tells her, he spied on us when we were roasting marshmallows over a small fire pit in her backyard. I laugh as all this makes me fell like a teenager at 50 years old. Her family decides I'm not a bad person as Rosemary (my grand daughter's Great Grandmother) has vouched for me.

No matter how old you get, dating never gets any easier.

I wonder how hard it is for Patty? Being two years in a coma, learning to talk and walk again.
She had to learn how to live alone again. How did she get the courage to date again?
Posted by Robert A Vollrath at 8:32 AM 4 comments:

I was a failure as an artist. I put the gun to my head and pulled the trigger.

Echos of my death followed me into a burning blue light that shredded my soul and feed my life force to an unknown number of new humans in a single moment of eternity.
Posted by Robert A Vollrath at 2:05 AM No comments:

The blade came down upon my neck and I should have died but I didn't. A toothless fool pulled my head out of the basket and showed me to the mob of cruel people laughing at my death.

I tried to scream my hate at them but I had no body and knew death in that moment.

No eternal light beckoned me or mean embrace of hell to claim me. I was but a whiff of nothing full of rage.

Years pasted and I tired of cruel jokes only a ghost could do. The hate left me and I found the light.
Posted by Robert A Vollrath at 1:47 AM No comments:

I would be dead soon. The pain was too great. My flesh was tied in knots and I could no longer carve the glyphs. I had no wife or children, so all my wealth would go to my Scroll of Eternity.

"What of your body?"

"Let the desert preserve me and my good deeds embalm me, for soon I will be the wind."

Such talk shocked my friends and they thought I put a curse upon my glyphs. After my death none would finish my glyphs and none would destroy my carvings.

Death wasn't what I knew it would be. My soul was never weighted. Many lives and deaths passed and one moment in eternity I looked at my glyphs with new eyes in a tomb of knowledge.
Posted by Robert A Vollrath at 1:13 AM No comments: 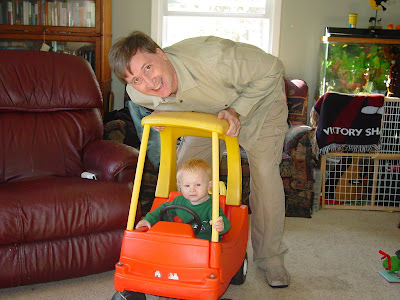 I couldn't find the toddler car I wanted to get my grandson but my time was up and I had to go on the journey to his birthday. I needed to pick an item in Chicago so I headed east.

I was traveling down the endless road on I-70 East in Missouri just 50 miles from Saint Louis when I made a simple wish.

"I wish I could have found a little play car for my grandson Denver."

With that spoken thought an invisible hand grabbed the top of my head and turned my field of vision to the left. On an outer road running beside I-70 West was a thrift store with an orange and yellow toddler play car sitting in the parking lot.

I turned at the next exit and bought the tiny ride in foot powered car.

A day before my grandson's birthday party I gave him his first used car. In a house in Bloomington Minnesota , a grandfather pushed a little foot powered car around with his grandson.The two bonded with that little car.

When the play time was over Denver was held in his Grandfather Vollrath's arms.
The little boy kissed his grandfather twice on the cheek and put his head on the old man's shoulder.

"Thanks the powers that be for a simple wish granted."
Posted by Robert A Vollrath at 10:34 PM No comments: